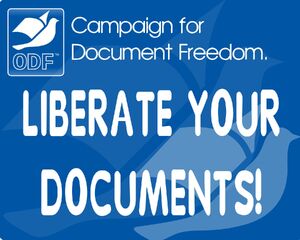 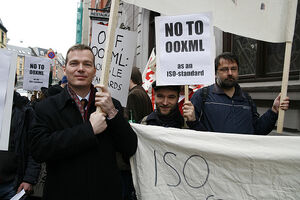 We live in an age in which paper documents increasingly get replaced by electronic records. Document freedom is fundamental for your documents to outlive the application you are currently using and allows you to choose and change applications freely.

"Previous proprietary document formats have become difficult or impossible to read within little more than a decade. There is no reason to believe this trend will not continue if allowed so to do. Without open standards for our documents we are likely to inflict a 'digital dark-age' on our descendants when they discover that they are unable to read any of the sources for their history, such as Government records, acts of Parliament, property title deeds, scientific research papers, and family histories. They will not forgive us if we fail to act to protect them now, but instead allow another generation of poorly specified proprietary standards to become widely adopted." - from UKUUG press release

"In the case of document format storage, a standard is truly important because formats (poor or not) that eventually lose implementations over time carve out blank spaces in our history once we can't read them properly. These same formats are also the source of certain information inequalities in society (e.g. those who can't obtain an implementation for financial, social or political reasons). This may not matter so much for Acme Inc's quarterly reports but it sure does for government, health and other socially vital information. Remember when some hurricane Katrina victims couldn't use the FEMA website because they had slightly older computers? This isn't a made up boogyman, this is stuff that bites us as a society fairly regularly. Now imagine a hundred years from now when we can still read the constitutions of our countries, research papers, poetry and other examples of human kind's great literary works that are hundreds or even thousands of years old ... but can't read the documents we're creating at the start of the 21st century. How will we learn from our history if we can't study it fully?

Getting proprietary formats out of the way as soon as possible so that we do not extend this mess any further than necessary is absolutely the responsible thing to do in light of our (hopeful) future." - Aaron Siego

Electronic records kept today include records of your government, such as tax and legal records or minutes of parliamentary proceedings. Making sure that such records remain in the control of the government is essential for a functioning democracy. The same is true for all interactions between citizens and their government, which should never depend on monopolies or on the proprietary product of a single company.

How to achieve Document Freedom?

Make a stand by saving your documents in ODF today. If your application does not support ODF, get one of the ODF supported applications like OpenOffice.org, KOffice, AbiWord, etc

Here's a quotation for the ages, from an Alex Brown comment on Andrew Updegrove's Standards Blog (scroll down) asking Brown if he'd agree that ODF was cleaner than OOXML:

"I'd go with that. I think ISO/IEC 26300 (ODF 1.0) can be compared to a neat house built on good foundations which is not finished; 29500 (OOXML) is a baroque cliffside castle replete with toppling towers, secret passages and ghosts: it is all too finished."

Now he tells us. Still, better late than never. And I couldn't have put it better myself. But if it's that bad, why is it an ISO standard? A standard with secret passages is a standard no one can implement unless they have a map and the keys. We don't have either. Only Microsoft does. Thanks, ISO, for this little anticompetitive joke. [...]

The public cares about ODF, because it realizes it will impact every one of us directly, and we see the obvious, that OOXML is a spoiler. This has nothing to do with market share.

The role of standards

For users, the benefit of a standard is to have compatibility between competing products in the market. As soon as there are two or several standards for the same applications, these are no longer standards, but mere technical specifications. If there had been only one ISO-approved format, it would have been a means to relaunch competition and innovation in the office productivity market. if there are several, the situation remains the same as in the past. The existence of a dual standard doesn't bring anything more than the absence of a standard. - Frédéric Couchet, APRIL, the main French advocacy association devoted to promote and protect Free/Libre Software.

by Steve Pepper, the Chairman of the Norwegian mirror committee for SC34 (K185) for 13 years until resigning a couple of weeks ago in protest against Standard Norway’s decision to vote Yes.

The Candle light vigil demands India to appeal ISO approval of ooxml based on its comments and no vote. We also demand the Department of IT to draft a clear national policy for the use of Free standards for data storage.

This programme is planned as a starting point for various events & awareness campaigns on Document freedom.

Where: Near Corporation Circle, In front of the Townhall, Bengaluru

We request all user to 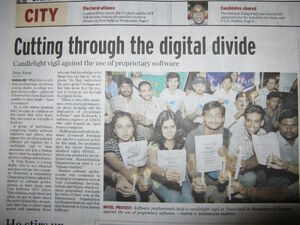 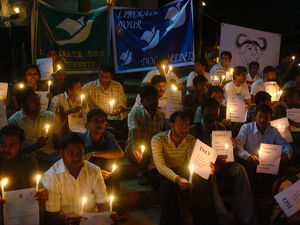 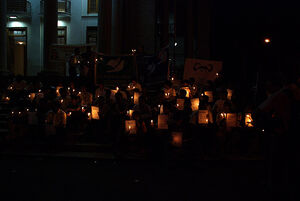 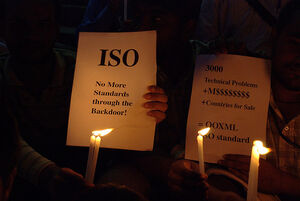 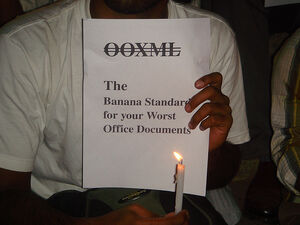 Pictures of Open Letter on College Notice Board

Retrieved from "https://fci.fandom.com/wiki/Campaign_for_Document_Freedom?oldid=7956"
Community content is available under CC-BY-SA unless otherwise noted.