Say No To Software Patents 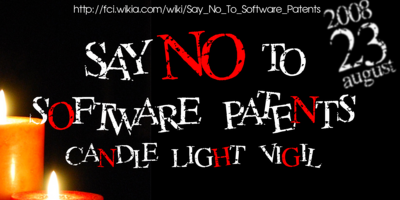 A campaign to stop the introduction of Software Patents in India. Software patents are rejected by Indian Parliament in 2005 (Patent Amendment bill 2005). But Indian Government is now trying to push it through back door by bringing a Patent manual. Public consultations on this draft manual is going on in various metros in India. Bangalore Consultation is scheduled for the last week of August. 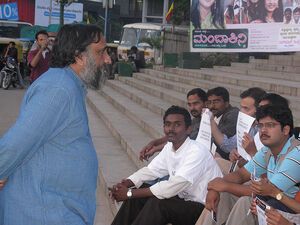 The Candle light vigil to "Say No To Software Patents" is a occasion to raise civil society voice against this back door trojan to Indian patent system.

Software is a key technology that is important to every company, every public administration, and every household. Therefore, everything that makes the software industry ill has effects on the entire organism, on all aspects of the economy and society.

On 23rd August 2008 at 5.30 pm in front of Town Hall near Corporation Circle, Bangalore. Publicity campaigns will be hosted in various places on 22nd.

Where: BMS College of Engineering, Basavanagudi

Agenda: Indian Patents office has called for a meeting of stakeholders in Bengaluru on 27th August (date still to be confirmed). We should submit a written appeal to stop introducing software patents in India. We will prepare this document here.

join online at #bmslug in freenode

Please email your appeal letter to (delhi-patent AT nic.in) and send a cc to Dr. W. M. Dhumane (wmdhumane AT rediffmail.com) who is Joint Controller of Patents & Designs and Incharge of Patent Manual

Community content is available under CC-BY-SA unless otherwise noted.
Advertisement